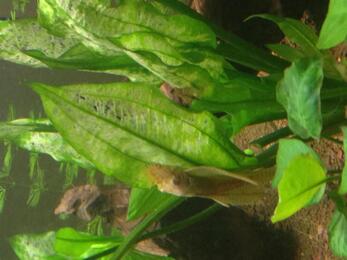 The sudden appearance of holes all over plant leaves can lead many hobbyists to assume they have a deficiency in their planted tank. The problem is that it is difficult to diagnose a deficiency just by looking at a leaf – you would really need to measure all nutrient levels to confirm.
While true that holes in leaves can be indicative of a nutrient deficiency such as potassium, more often than not this leaf damage is actually caused by hungry herbivores.
Broad leafed plants with delicate leaves such as Java fern,  Alternanthera Reineckii or Hygrophila Corymbosa are particularly targeted by plant-eating species. Bristlenose, some larger shrimp species, mollies and others will all have a nibble on the older leaves of plants as well as some tasty new shoots if they so desire.
​So how do you determine if your plants are victim of deficiency or a voracious pleco?
​
Step 1 is to examine leaf structure. If the leaf itself looks healthy, with good colouration and no melting or distorted growth, that tells us the plant is likely not deficient.
Step 2 is to examine the damage. Herbivore damage is usually made along the middle length of leaves. Holes are generally large (bigger than pinhole size) and random. Holes caused by deficiency will be small (start as pinholes and grow with melting at edges) and more uniform in appearance. With herbivore damage, it will almost look like someone has taken sandpaper to a leaf and worked on it until holes appear. Imagine the rasping mouth of a pleco or snail and you can imagine why the damage looks like that!
Step 3 is to examine other plants in your tank. If only one or two species have been affected, it is likely to be herbivore damage. If your tank has a nutrient deficiency, you will see symptoms across most of the plants in your tank rather than one or two.
Finally, check new growth. Deficiencies are easiest to see in these areas and will show up as distorted stems/leaves, poor colouration and/or stunted growth.
Old leaves will often deteriorate naturally, so should not be used as a marker for nutrient deficiencies. These older leaves are also more likely to be eaten as they begin to break down.

How can I avoid future herbivore damage?
While not foolproof, keeping your herbivorous livestock well-fed with a regular assortment of blanched vegetables (e.g. zucchini, sweet potato) and algae-based fish foods will reduce their desire to feed on your plants. Providing a healthy and varied diet to your livestock is always a good idea!

​From The LCA Team
Every Solution For Your Aquarium