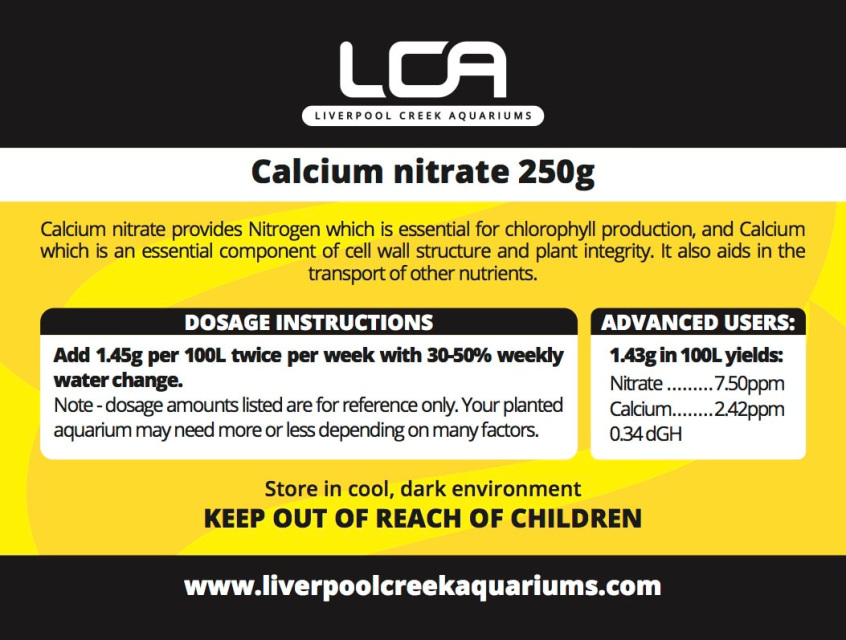 Calcium (Ca) an essential component of cell wall structure and plant integrity, it also aids in the transport of other nutrients

SKU:
Add to Cart
Instructions per 100L :
Add 1.45 grams into 100L tank twice per week with 30-50% weekly water change.
*Amounts above are for reference only. Your planted aquarium may need more or less depending on many factors.
Advanced users:

Store in cool dark environment
​KEEP OUT OF REACH OF CHILDREN
Besides light and carbon dioxide, Nitrogen is the most needed element by aquatic plants to grow healthy. After carbon, this is the element plants need the most amounts. A nitrogen deficiency results in slower growth of aquatic plants, which is also the reason for algae growth.

Plants require nitrogen for hundreds of things. As an example, all amino acids have nitrogen in them. Amino acids are the building blocks of proteins, without which no life can sustain. Nitrogen is also an important part of chlorophyll, nucleic acid and plant hormones.

The air we breathe has 78% Nitrogen in the gaseous form, but plants are unable to use it in the gaseous form. The most usable state of nitrogen for aquatic plants is ammonium (NH4) and Nitrate (NO3). Some plants can also absorb nitrogen that is in the form of urea (CH4N20). The nitrogen cycle is very important for both terrestrial and aquatic plants. This cycle explains the conversion of ammonia, nitrate, nitrite, ammonium, urea to gaseous nitrogen, which is performed by a bacterial colony.
Sources of Nitrogen in an aquarium:

In the aquarium, leftover fish food, various organic compounds, fish waste, etc. degrades and produces ammonium. A good bacterial colony will convert it to nitrate by this process: Ammonium àNitrite à Nitrate. This organic source of nitrogen can often be insufficient for a heavily planted tank.
How plants use nitrogen?

Some species of aquatic plants prefer nitrogen in the ammonium form, while some other species prefer it in nitrate form. Some plants even use both of these forms. It takes a lot of energy to convert nitrate into ammonium, however, vacuoles in the cell of the plants can store nitrate ions and they have high transportation speed within the plants. Unlike nitrate, ammonium is never stored within the plants. They are used right away or converted to nitrate by a bacterial colony. If the pH of the water becomes more than 7.5, ammonium can turn into ammonia, which is poisonous and also the reason for high algae growth. High level of nitrate forms inorganic sources such as Potassium Nitrate
(KNO3), which is not poisonous for many organisms in the planted tank.
Nitrogen Deficiency Symptoms:

=>Smaller leaves becoming lighter in color is also an indicator for nitrogen deficiency.

=> Some species of plants may show a reddish discoloration.