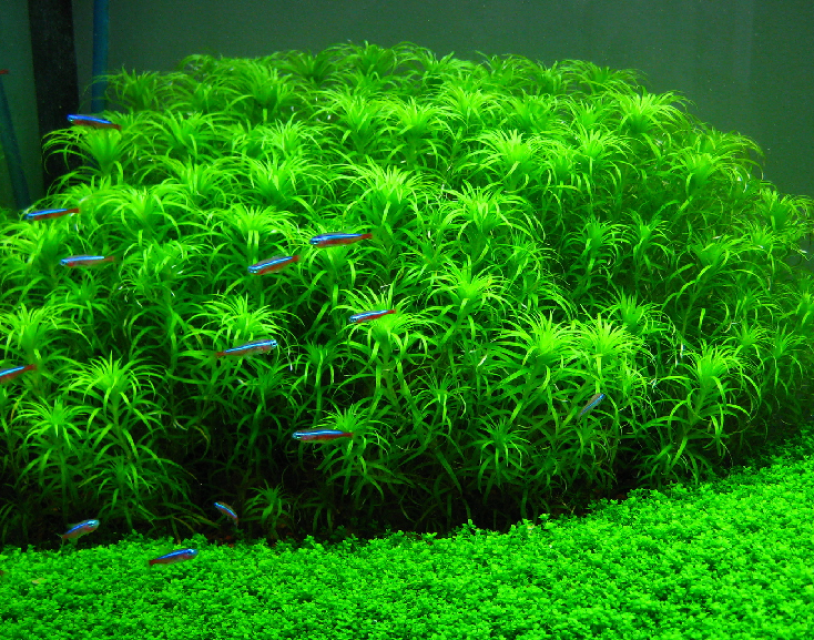 This distinctive stem plant displays narrow, pointed leaves that are bright green in colour and curl downwards at their tips. They grow from shoot tips in a rosette pattern, creating firework-like explosions of green. The unique appearance of Syngonanthus Macrocaulon makes it an especially eye-catching midground focal point.

Add to Cart
Syngonanthus sp. 'Belem' (likely Syngonanthus anomalus) was first introduced into the aquarium plant hobby by the Japanese company Rayon Vert. This delicate species inhabits very soft, blackwater rivers and streams near the mouth of the Amazon River. The name 'Belem' refers to the city near where it was first collected. Long known in much of the hobby as Tonina sp. 'Belem', it differs from the true, and only, Tonina species by its capitate inflorescences on long scapes, which are similar to those of typical Eriocaulonspecies and arise from the crown of a stem. In contrast, the inflorescences of Tonina fluviatilis arise from nodes all over the stem and have very short peduncles.

Syngonanthus sp. 'Belem' has a reputation for being difficult to grow but is rather forgiving provided its basic requirements are met. This plant requires strong lighting (3 watts per gallon or more), CO2 supplementation, and soft water; for strongest growth, KH readings should not exceed 4, with 2 or lower being best. As with all species from its genus, Syngonanthus sp. 'Belem' will appreciate an acidic substrate such as Aquasoil or Florabase. Ample iron in the water column or substrate is required to maintain the bright green coloration that is characteristic of healthy specimens.

This Syngonanthus species gains height at a moderate pace, as it puts most of its energy into growing a profusion of side shoots. When pruning is necessary, cut and replant only the top two inches of each stem for best results, since starting with trimmings that are too tall will result in the lower portions becoming laden with roots and appearing wasted. Shorter trimmings will grow out into cleaner, healthier, and more attractive stalks.

Due to its unique appearance and growth habit, Syngonanthus sp. 'Belem' is a tricky subject to integrate into an aquascape. It is most effectively used as a midground accent in medium- to large-sized aquariums where it can form an excellent contrast to unruly grassy plants (Sagittaria subulata, for example). This species can also be very attractive in layouts dedicated to the genera Tonina andEriocaulon.