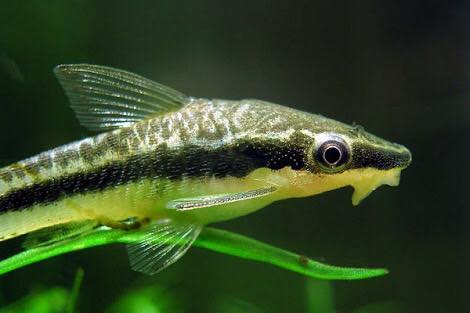 Otocinclus is a genus of catfish in the family Loricariidae native to South America which are commonly called "dwarf suckers" or "otos". This genus, like other loricariids is characterized by rows of armour plating covering the body, as well as the underslung suckermouth

In terms of Otocinclus Catfish care, Ottos should be added to a well established, mature, stable and clean aquarium in order to allow them the greatest chance of survival. Otocinclus Catfish like heavily planted tanks with a good amount of established algae growth especially of the soft filmy and soft green varieties.

An Otocinclus feeds on soft algae buildup growing on hard surfaces of the tank. That’s why its important to make sure the tank is clean, but not “too clean”. Otocinclus food can also include supplements such as algae wafers and even some fresh vegetables like green zucchini slices.

Some Otocinclus will eat green zucchini slices and some will not, so try it out for a few days. If the Ottos do not appear to be interested, take the zucchini out of the tank before it decomposes, disintegrates and creates water quality issues.